One of the executives at my company is involved in a group that organizes an annual outing to a Durham Bulls baseball game. He asked me to have a go at creating a flyer to replace the Word doc/clip art item that has gone out in the past. I am always happy to take one more Word doc posing as an advertisement out of circulation. (We have the technology!)

At first I went to a stock photography site to start the hunt for…baseball fans? a baseball? a baseball diamond? Let me say, I dread searching through stock images. It seems there’s never quite the right thing. But not long into the search I realized it would be a lot of fun to create a little illustration they could potentially update every year and make this outing more of an event. I’m actually still waiting for feedback on this, but I don’t think there’s any harm in sharing it. Just a fun little project. I have a weakness for banners. 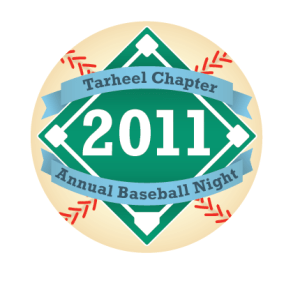 Every year LGFCU enters projects into the CUNA Diamond Awards, a credit union marketing competition. And they have a funny way of announcing the winners. First they tell you that you won something, but they don’t tell you which items won, what the award is, or even how many awards. So you have to either go to the award ceremony or wait until they are announced.

We knew we won at least one thing. On Sunday they were announced and on Monday I found out that the annual report I worked on last year won the top honor for our asset size, $1 billion and above, which is the largest asset size category they have. Need proof? We are way down at the bottom.

The concept of the report was on how we helped different aspects of North Carolina’s communities, by the numbers. The beginning of each section has a big bold number knocked out of a field of color. Sometimes the number represents money saved, or miles of driving saved, or how many people attended financial wellness seminars.

Screenshots and PDFs don’t really do it justice, but that’s all I have at the moment. A full PDF can be downloaded from LGFCU’s site. We used a gloss varnish on the photographs and on the fields of color throughout the report. The cover was also treated with a varnish so the lighter gray numbers were glossy. It is very subtle. And as a call to action/take away, on the interior back cover we had a coordinating magnet fugitive glued, with the message of the title repeated, “What can we do for you?”

Here are a few of the spreads. 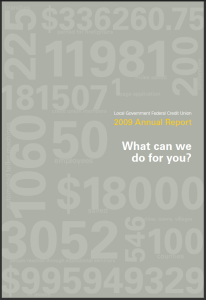 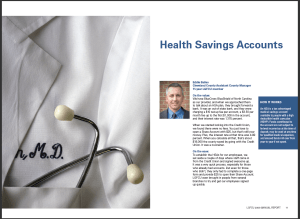 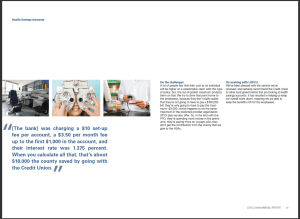 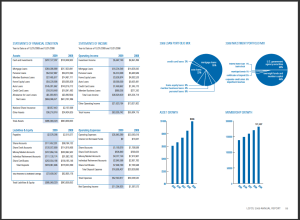 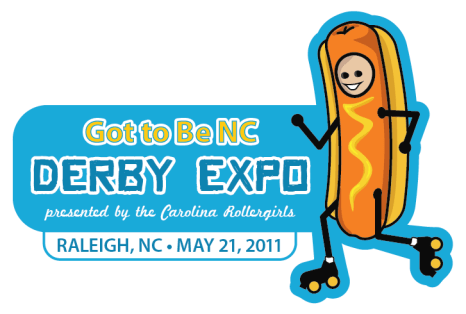 The Carolina Rollergirls knew one of the dates they had at Dorton Arena was during the ‘Got to be NC’ festival, and so they decided to take that date and have an all-day derby event. Four visiting leagues will come to Raleigh.

I’ll switch point-of-view here since I’m one of the Carolina Rollergirls, and it feels weird to say, “they.” We knew we wanted our event to feel like part of the festival. I had a look at their logo.

I thought our event’s logo should reference the festival’s, but be uniquely roller derby. As I was discussing design ideas with my derby cohorts, we started having a closer look at the festival logo. In an email discussion on the name of the event I said, “Ok. I’ll start designing a logo with a sheep in a tent, a hot dog and a tractor wearing roller skates.” And that’s where the joking idea of a hot dog on roller skates started taking shape. Kelly (aka Lady Smackbeth) drew a quick sketch in MS Paint of what a hot dog on roller skates might look like.

There are times I get to have some fun designing for my day job, but it’s never as out there as derby design can be. That’s what makes my pro bono freelance gig so refreshing. When roller derby is at its best, silly and absurd is embraced. And even though I had, at first, dismissed the idea of a roller skating hot dog as just a joke among a few people, the more I thought about it, the more I came to realize that a roller skating hot dog was perfect. It was so crazy, it was perfect. Even though Kelly’s Paint sketch was done for laughs, I did actually take some inspiration from it.

I was so hesitant to go full hot dog, that I tried a few different variations. One
approach I had was to make it look like the words ‘derby expo’ were stamped onto the name of the festival. However after trying that out a few ways, I didn’t feel like I was getting anywhere. And then I tried a completely different approach, starting like how I was taught back in college, working only in black and white first. I came up with a couple nice marks, but they just didn’t have the personality of the hot dog. By the time I showed my ideas to friend and fellow marketeer, Ed, the hot dog was already far more developed. It was pretty clear that I favored one.

And so that’s how the roller skating hot dog came about. I had so much fun drawing it that I wouldn’t have minded if it didn’t make the logo cut. I knew I was going to do something with that little guy, or girl? 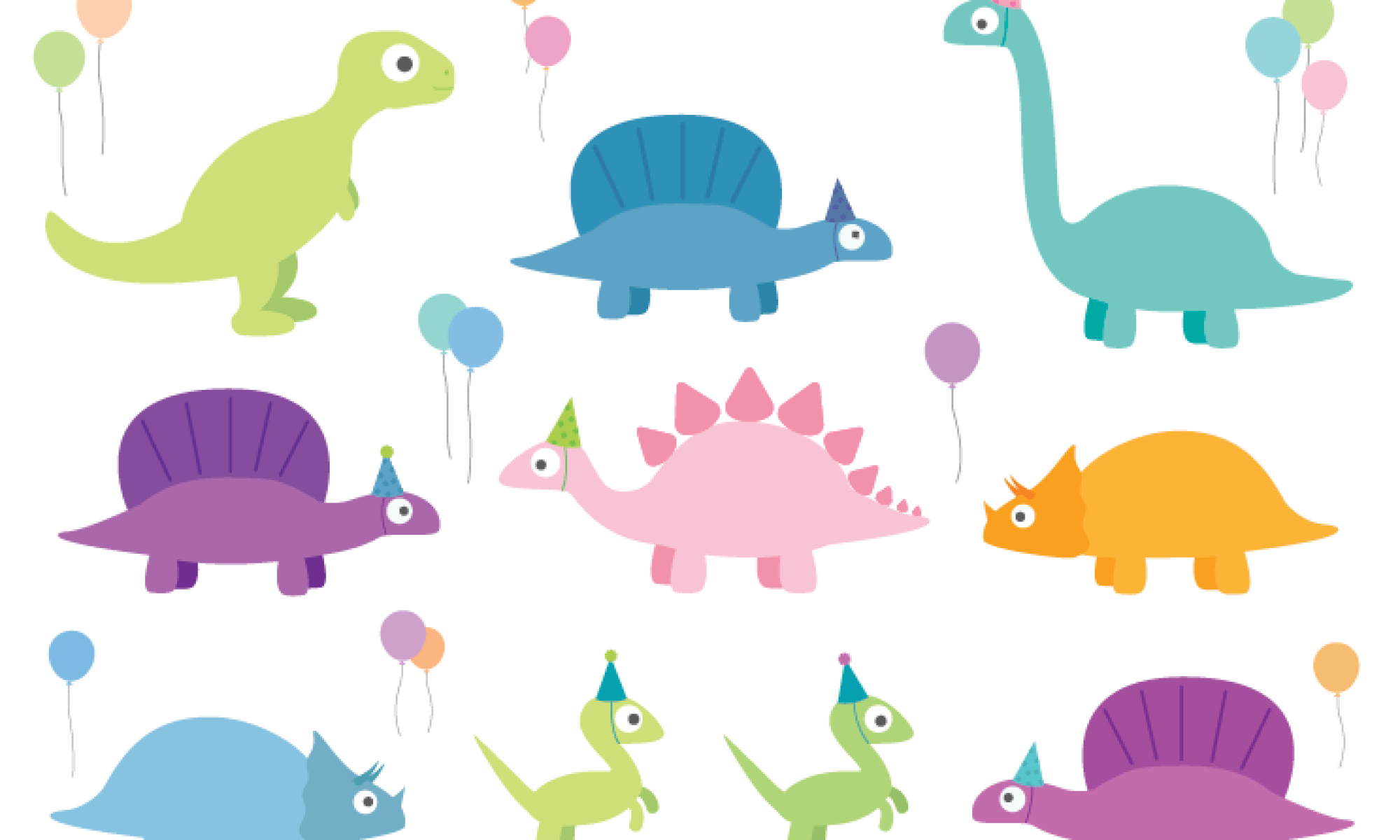 I added some new images today to the Illustration section. Clicking on the thumbs will show you the whole thing in all their glorious glory.

My latest favorite thing is the dino party. These little guys were designed for a birthday card that was supposed to be way off-base for teenagers, to the point it’s just funny. As I was drawing them and refining them, I was cracking myself up, especially when I added the little straps on the birthday hats. For the final art, I took the little pink guy in the middle, made him blue, and used him alone. The card will look like one of those “You’re 3!” kind of cards, but with things scratched out with marker, as if we found a used card and recycled it. Hopefully the recipients will get the joke. Meanwhile, I have a lot of adorable dinos hanging out that won’t necessarily get used. Hmm…what to do?

Personally, I hate most greeting cards. Going to the store to buy one is one of the most stressful things that shouldn’t be stressful. I wish more of them were just blank. It’s those sappy messages that I get caught up on. That’s just not my style. So it’s not that unusual for me to buy a childish card for someone’s birthday, cross through the “wrong” parts and sign it.

I also added a little stressed-out boy with his parents sluggishly napping behind him. This went with an article for kids about helping out more around the house. I really enjoy the detail on the dad’s socks, and of course, the retro mustache and sideburns. It’s like it’s my dad back there from my own childhood. Except that couch would need to be navy blue with little white dots all over.

A similar, though unrelated image, is the stress meter. This is just a little graphic I made that I stumbled across the other day and said, “Hey, I really like that. And I totally forgot about it.” It was part of the graphics for an article about stressing out over finances. The cartoony sweat drops make me happy. And the color palette feels very…fresh? Balanced? Well, I like it. I’ll leave it at that.

Well, look at you. You found my site. Please have a little look around.